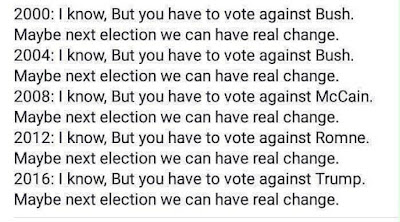 Posted by Edward Berge at 12:06 PM No comments: Links to this post

Reich: How Dems contributed to Dump

Dump was right that the establishment system was and still is rigged. And yet the Dem Party has done little to nothing to unrig it. Hence when 2016 came around a lot of people justifiably thought Hillary and the Party were part of that establishment rigging.

Reich recommends that the only way to counter Dump's authoritarian populism is with progressive populism. But the Dem Party made clear in the primaries their hatred of Bernie and that they want nothing to do with that sort of agenda. Hence Biden, their chosen one, will maintain their rigged status quo. And unfortunately with the same result as last time.
Posted by Edward Berge at 10:20 AM No comments: Links to this post

From Fairness and Accuracy in Reporting (3/28/20). So why didn't corporate media report on this?

"Anyone who actively encourages people to gather in mass, and in close proximity, is doing so at a mass scale. So why, in contravention of CDC guidelines and health experts’ urgings, did the DNC and Joe Biden’s campaign do just that at immense scale earlier this month, as major cities were already closing up public spaces?

"Yet after the CDC on March 15 advised the public to cancel all gatherings of more than 50 people, a senior adviser to Joe Biden, the current frontrunning Democratic presidential candidate, went on CNN (3/15/20) and claimed the CDC had deemed in-person voting safe. And not a single major media outlet reported on it. Nor did they report on the actual dangerous conditions at multiple primary voting sites, and the exposure of trusting citizens to the coronavirus that the adviser’s reckless advice had encouraged. And it wasn’t just one irresponsible adviser that put people at risk: Democratic National Committee chair Tom Perez made misleading statements, downplayed the dangers and exaggerated the preparedness of voting sites, and criticized and threatened states which wanted to postpone their primaries. The Biden campaign as well as the DNC put politics over people, exposing countless voters to a fatal virus."


Posted by Edward Berge at 9:55 AM No comments: Links to this post 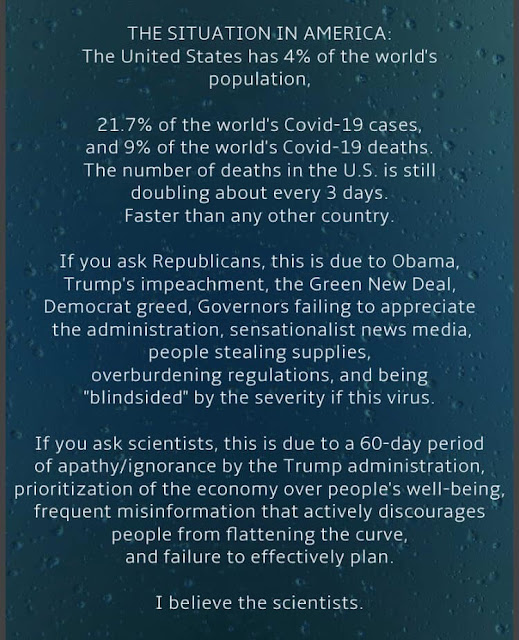 Posted by Edward Berge at 7:38 AM No comments: Links to this post

He is working on legislation to address the pandemic. It proposes to pay everyone who has lost their job the same wage they were earning. This provision was in the last Bill for airline workers. Bernie wants to extend that to every worker.

It also proposes that everyone who contracts the virus get all the treatment they need with no out-of-pocket expense through the current Medicare system. Millions who have lost their jobs also lost their health insurance and cannot afford the high cost of treatment. Plus many who are fortunate enough to have any health insurance likely has gaps that leave the patient with uncovered services.

Then there's the issue of health care providers not having the needed equipment to keep themselves safe and treat their patients effectively. So Dump must invoke the Defense Production Act to force private businesses to produce the needed equipment quickly in needed quantities. Which, by the way, said businesses will be financially compensated fairly.

See the video for the rest. Bernie is hard at work presenting the most effective solutions to this tragedy, acting like the true statesman and representative of we the people. Please consider supporting this new legislation by contacting your Senators and Representatives now.

Posted by Edward Berge at 12:21 PM No comments: Links to this post

Trevor Noah of The Daily Show put together clips of the Repugnantan response, which of course Dump followed. This blatant head-in-the-sand BS literally cost lives, lives which mean nothing to this clown show. The death camps are alive and well and operating in Repug land.

Posted by Edward Berge at 11:39 AM No comments: Links to this post

Distinguishing between reality and fluff

Caitlin's sage advice on how to know the underlying reality versus the corporate spin machines that intentionally obfuscates that reality. Look to where the money is going: corporations and the rich. Notice where the resources are, like oil, and how the 1% overlook any faults (like genocide) to court those countries where it is. Notice where the US is placing military bases, which tell us about our real intentions. Watch the refugees, which tells us about where major human rights abuses are, and who created those conditions in the first place.

Then my advice: Focus on the facts, not on the fake stories we are fed. But humans need story to understand and process facts. So we can and must create narratives based on the facts. Such stories, based in reality, help us to understand and do something about the liars and cheaters that are the source of our problems in the first place. This is why those forces hate the truth so much, and will do everything in their power to silence it. We the people must do everything in our power to disseminate the truth with powerful and effective narrative lest we descend into the sort of fascism they seek. Our very lives depend on it, and that's the truth.

Posted by Edward Berge at 9:10 AM No comments: Links to this post

You thought I was kidding about death camps

They're already here, with Dump and the Repugs being a death cult. Death for us, that is: the workers, the aged, the downtrodden, those not deserving of life. From this piece:

"Our ruling classes are coming to the conclusion that in the contest between loss of profit and loss of life, they choose death. [...] Rising among the ruling class — centered on the Republican Party, but not found only there — is what we might call the Party of Death. [...] Large masses of people who are, for the ruling class, regarded as too old, too sick, or too otherwise unproductive to be profitable. For the Party of Death, the pandemic itself begins to appear economically useful, and the measures needed to combat it can come to be seen as worse than the disease — which, from the narrow perspective of capital accumulation, they may well be."
Posted by Edward Berge at 8:47 AM No comments: Links to this post

Emma discusses an interview where Dump accidentally admitted this. Granted he will never, ever institute anything remotely like it because there's no profit in it. But he did admit it. She then notes that the pandemic has starkly highlighted that Medicare For All would be just what the doctor ordered, since millions are losing what little health insurance they might have had when they lost their jobs. And good old boy Joe still refuses to accept MFA and denies it would have made any difference during these troubled times.

Posted by Edward Berge at 4:22 PM No comments: Links to this post

The fascist dictator of the Philippines, one of Dump's heroes, has issued orders for the military to shoot to kill citizens who resist the pandemic lock down. Why are they disobeying the order? Because they don't have the promised food or medical supplies needed to survive. Now that Dump has been made aware of this policy, how long before something similar like military law follows in the US?

Posted by Edward Berge at 3:53 PM No comments: Links to this post