We explored this theme in two recent threads, "Black Swan" and "horror and spirituality." Here's an article that explores the relationship between creativity and schizophrenia. A few excerpts:

"Brain scans reveal striking similarities in the thought pathways of highly creative people and those with schizophrenia. Both groups lack important receptors used to filter and direct thought. It could be this uninhibited processing that allows creative people to 'think outside the box,' say experts from Sweden's Karolinska Institute.


"Creativity is known to be associated with an increased risk of depression, schizophrenia and bipolar disorder. Similarly, people who have mental illness in their family have a higher chance of being creative. Associate Professor Fredrik Ullen believes his findings could help explain why. He looked at the brain's dopamine (D2) receptor genes which experts believe govern divergent thought. He found highly creative people who did well on tests of divergent thought had a lower than expected density of D2 receptors in the thalamus - as do people with schizophrenia.

"The thalamus serves as a relay centre, filtering information before it reaches areas of the cortex, which is responsible, amongst other things, for cognition and reasoning. Fewer D2 receptors in the thalamus probably means a lower degree of signal filtering, and thus a higher flow of information from the thalamus,' said Professor Ullen. He believes it is this barrage of uncensored information that ignites the creative spark. This would explain how highly creative people manage to see unusual connections in problem-solving situations that other people miss. Schizophrenics share this same ability to make novel associations. But in schizophrenia, it results in bizarre and disturbing thoughts."

From "Why a touch of madness boosts creativity" at this link:

"Anthony Storr told the annual meeting of the Royal College of Psychiatrists in Birmingham that genius tended to be born of madness. 'Creativity should be linked with mental instability,' he said.... Dr Storr said recurrent manic depression was common among writers and poets. Extreme mood swings or mania could provide creative people with depths of insight and emotional intensity that so-called normal people could never achieve.

"While severe mental illness normally precluded creative work, men and women of genius tended to have a mental disorder. "Those who are at ease with themselves are just not motivated, so we should not be surprised that many creative people are disturbed," Dr Storr said.

"Philosophers and mathematicians tended to be loners, incapable of forming long-term relationships with anything other than their work. Newton, Descartes, Pascal, Hobbs, Nietszche, Kant, Lichtenstein and Spinoza never married. "They formed a relationship with the abstract that made it impossible for them to form a personal relationship," Dr Storr said. 'They were much more interested in a relationship between numbers or abstracts than with people.'

"History suggests that the line between creativity and madness is a fine one, but a small group of people known as schizotypes are able to walk it with few problems and even benefit from it.

"A new study confirms that their enhanced creativity may come from using more of the right side of the brain than the rest of us.

"In the spectrum between normal and insane, schizotypes generally fall somewhere in the middle. While they do not suffer many of the symptoms affecting schizophrenics, including paranoia, hallucinations and incoherent thoughts, schizotypes often exhibit their own eccentricities.

"'They may dress or carry themselves in a strange way,' says Bradley Folley, a graduate student in clinical psychology at Vanderbilt University in Tennessee and the lead author of the study. 'They're not abnormal, they live normal lives but they often have idiosyncratic ways of thinking. Certain things may have special meaning for them or they may be more spiritually attuned.'

"Their brains were monitored using a brain-imaging technique called near-infrared optical spectroscopy.The scans showed that both sides of the brain in all three groups were active when making novel associations. However, in the brains of schizotypes, the activation of the right hemisphere was much higher compared to brains of the control subjects."

Here's one of my favorites of the creatively mad, or madly creative. The one, the only, Lady Gaga: 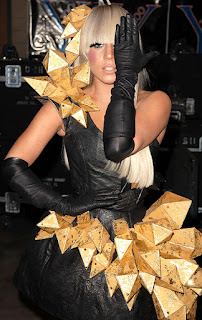