In the IPS thread on a theory for anything we've come up with alternative names for types of holons. For example, I call those hegemonic theory of everything holons, like the AQAL diagram, assholons. Balder argues that we can have big picture holons as long as we keep their conditional, interpretative and enactive nature in mind and calls those meta-holons or plurons. I choose to call those khorons, from the root khora, explored in the what "is" the differance thread. A khoron (or core-on) is a hard on for core issues. As I age I get fewer physical hard ons (and someday none) so I need to channel that energy into the subliminal. I'm building my rainbow holon body today (aka The Word) in preparation for infinity (aka Death).

In that light/shadow here's a reminder from Edwards in the religion and politics thread: 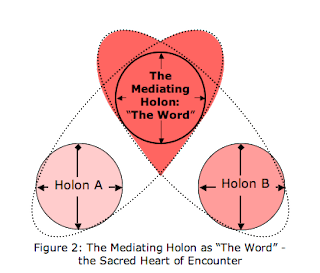 "In the [preceding] figure I draw two holons encountering each other in a moment of relationship. The space between is filled with the interobjective artifacts of that encounter – words, gestures, signs, touch, meanings, displays, roles, communications. Using the developmental ideas of Vygotsky the space between is filled with the mediating processes and artifacts that flow between the two holons. We can draw an holonic boundary around some logical grouping of these artefacts to identify the “mediating holon”. The archetypal mediating holon is the “Word”. The pure expression of communion. It is not coincidental that in the Catholic tradition the very heart of the great sacrament of the Mass is called 'communion.' This is the recognition of the Godhead as manifest through community, through sharing a meal together, through relationship—completely present in the most fundamental act of existence—a simple act of breaking bread together as incarnate beings. The beginning of all experience and all form and all communication begins there. Hence we have 'In the beginning was the Word. And the Word was with God and the Word was God.' John here is saying that Jesus is the true agent of Mediation, the ultimate source of connection that gives rise to all distinctions and all encounters between “two or three”. So in this figure of two holons encountering each other we have the 'Word' and 'Love' emerging from the space between."

I shall hereinafter refer to the seemingly everlasting* mediating holon simply as Word.

*For it outlives the person that spoke or wrote it and lasts a good long time, if not forever.
Posted by Edward Berge at 7:24 AM