Roseanne is the typical Dumpster

So it's good that she has returned to the show in her name. We need to see the typical Dumpster up close and personal. Granted it will only reinforce other Dumpsters, but for the rest of us, the overall majority of voters, we will have to face exactly what we're dealing with instead of using rationalization that these are just good people that are equally capable of making well reasoned decisions for the good of our country. And for those who voted for Dump that still have some of those reasoning powers they will see exactly with whom they associate, and the kind of country we are becoming fed by this merry band of racist, bigoted, xenophobic, hateful, pridefully ignorant and paranoid bunch incited by one of their own in Presidunce Spanky Dump. 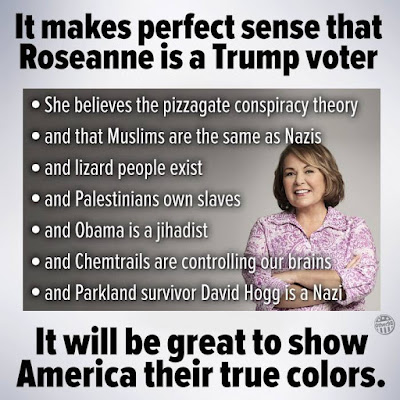