The Budget for All

Speaking of the CPC budget, the following is from their web page summary:

The Economic Policy Institute Policy Center provided technical assistance in developing, scoring, and modeling the Budget for All. Their technical report is available here.

The Budget for All puts Americans back to work, charts a path to responsible deficit reduction, enhances our economic competitiveness, rebuilds the middle class and invests in our future. Our budget makes no cuts to Medicare, Medicaid, and Social Security benefits, and asks those who have benefited most from our economy to pay a sensible share.

Our Budget Puts Americans Back to Work
• Our budget attacks America’s persistently high unemployment levels with more than $2.9 trillion in additional job-creating investments.  This plan utilizes every tool at the government’s disposal to get our economy moving again, including:
• Direct hire programs that create a School Improvement Corps, a Park Improvement Corps, and a Student Jobs Corps, among others.
• Targeted tax incentives that spur clean energy, manufacturing, and cutting-edge technological investments in the private sector.
• Widespread domestic investments including an infrastructure bank, a $556 billion surface transportation bill, and approximately $2.1 trillion in widespread domestic investment.


Our Budget Exhibits Fiscal Discipline
• The Budget for All achieves $6.8 trillion in deficit reduction, hits the same debt to GDP ratio as the Republican budget, and has lower deficits in the last five years, but does so in a responsible way that does not devastate what Americans want preserved.
• We achieve these notable benchmarks by focusing on the true drivers of our deficit – unsustainable tax policies, the wars overseas, and policies that helped cause the recent recession – rather than putting the middle class’s  social safety net on the chopping block.

Our Budget Creates a Fairer America
• Ends tax cuts for the top 2% of Americans on schedule at year’s end
• Extends tax relief for middle class households and the vast  majority of Americans
• Creates new tax brackets for millionaires and billionaires
• Eliminates the tax code’s preferential treatment of capital gains and dividends
• Abolishes corporate welfare for oil, gas, and coal companies
• Eliminates loopholes that allow businesses to dodge their true tax liability
• Calls for the adoption of the “Buffett Rule”
• Creates a publicly funded federal election system that gets corporate money out of politics for good

Our Budget Brings Our Troops Home
• Responsibly and expeditiously ends our military presence in Iraq and Afghanistan, leaving America more secure at home and abroad
• Modernizes our military to address 21st century threats and stop contributing to our deficit problems 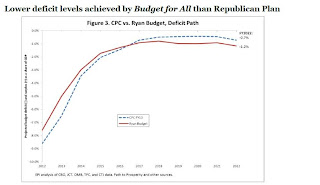