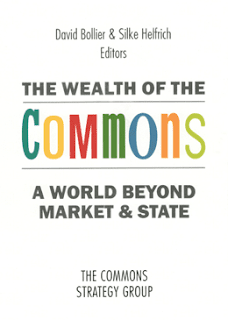 See this article by Michel Bauwens and Franco Iacomella. It criticized our current economic system on three levels:

The new vision centers around civil society's duty to sustain the material commons as well as share the immaterial cultural commons. The private sphere has its place for scarce goods and services but must be regulated properly by the government sector to prevent destructive and pathological greed while promoting its social responsibility. Democratic economic businesses like co-ops are encouraged.

The new civilization is not a return to premodern holism where the individual is subsumed in the government. " It is a society based on cooperative individualism rather than collectivism." This is exemplified by peer production between free agents working together for the common good.

There is much more in the article by way of details. Please give it a read.
Posted by Edward Berge at 10:36 AM