Or, she loves me knots... I like this Bryant blog post. Therein he describes his version of an integral methodological pluralism called alethetics.

"Rather than claiming to be the one framework that gets at the real, alethetics moves between different frames and windows; now discussing the way narrative informs our relation to the world, now the way our systems of categorization influence lives and nonhumans, now looking at lived experience as Sarah Ahmed does, now at the physical properties of fiber optic cables, the bubonic plague bacteria, etc."

His symbol for this is cool. 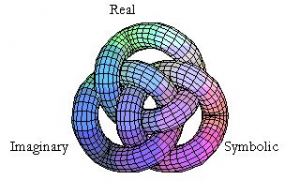 "What we need– or what I want –is something like the Lacanian Borromean Knot. Here the Imaginary would be the way in which one entity encounters another entity.... The symbolic would be the way in which entities capable of language signify the world through narratives, signifiers, signs, texts, etc. Who knows whether this is restricted to humans?... Finally, the real is the dimension of irreducibility of a thing to how it is perceived by another being (imaginary), or symbolized by another entity. It is the irreducible difference that a road has to affect us, for example, despite being created by us."

Also of curiosity is that he uses my avatar picture in this post. Coincidence?