The following tarot card was selected by using a random number generator (it chose 1), which number I used to count cards in this layout (decided before the number generator). Look at it a minute and let any free associations play. 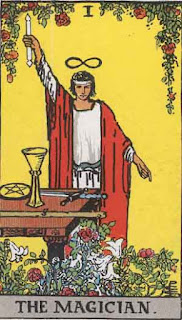 The first thing for me is the lemniscate above his head, since we were just discussing this symbol in the pattern dynamics thread. In the latter when enclosed it is his symbol for source. I don't like the enclosure so much, or I might like it better if it's boundaries were more porous as we've been discussing with suobjects in the OOO thread. In the card the symbol doesn't need a boundary around it, as infinity is open source, with all that entails within the (post)modern context of open source information and its P2P paradigm. Whereas the rigid boundary around source in Winton's version seems to suggest a kind of limiting or controlling of source through intellectual categorization, trying to 'tie it down.'


The next association came from left field, or more accurately from the point guard. The headband and hair reminds me of Steve Nash, who plays that position with the Phoenix Suns. I've been an avid basketball fan since childhood, and a huge Suns fan when I lived in the Phoenix area (Tempe) for 18 years. His ball handling, dribbling and assists were truly magical to watch, often elevating a game to quite ethereal heights (grounded on the court) with his adroit manipulations. For the card is very much about skill and manipulation.

And of course the 4 elements on the table indicate the 4 basic levels in a developmental holoarchy: pentacle for body, cup for emotion, wand for passion and will, sword for mind. The table and its 4 legs could symbolize the 4 quadrants. The magician could be that individual consciousness, or rather OOO suobjectness, that distinguishes it from every other, yet is connected to its environment-source-plurality via the lemniscate, this singular-plurality being spirit.

We are spirits in the material world...