Dump just grabbed the UN by the pussy!

See this story where the US used its veto power to thwart a UN resolution to end rape as a weapon of war. Dump and the gang are such avid rapists that this humanitarian resolution could not stand.

"The United Nations Security Council passed a resolution Tuesday aimed at ending rape as a weapon of war, after the U.S. used a veto threat to strip the measure of any mention of sexual and reproductive health. The Trump administration’s successful move to water down the measure over its opposition to abortion was blasted by France’s U.N. ambassador, who said, “It is intolerable and incomprehensible that the Security Council is incapable of acknowledging that women and girls who suffered from sexual violence in conflict, and who obviously didn’t choose to become pregnant, should have the right to terminate their pregnancy.” The resolution was championed by Nobel Peace laureate Nadia Murad, a Yazidi Kurdish human rights activist from Iraq. She was kidnapped by the self-proclaimed Islamic State and repeatedly raped as she was held as a sex slave for almost three months." 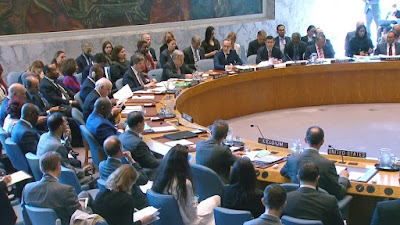