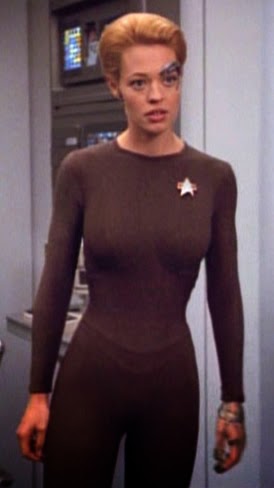 Continuing the Borg theme, Joseph commented: "The difference between the Borg and an enlightened community serving the common good is that the Borg never formed a strong separate ego to begin with."

Debatable. In this wiki on the Borg Queen it quotes her as saying: "I am the beginning, the end, the one who is many. I am the Borg." Shortly after it notes she is not an individual, but later on it also notes:

"Many different theories have developed over the role of the Queen and the extent to which she may represent a hierarchical structure in the previously supposed-to-be Collective nature of the Borg. The exact nature of the Queen is still hotly debated and has many possible explanations."

Regardless of the Queen's individuality, I suggested 7 of 9 as the human-borg totem, more in line with the balance of individual and collective. And a 'human' face more indicative of the tech that is 'implanted' in each of us through our use of tools.


Then there's Picard's assimilation into Locutus, which forever after changed and haunted him when he was 'fixed.' I'd suggest that Picard also influenced the Borg when he was Locutus. Those episodes between Locutus and the Queen did not fully develop this plot line.

And Picard had to win and destroy her, partly because even though Star Trek had many communal elements, it was still the command-and-control hierarchical military structure endemic of modernist individual imbalance projected into the future.

I'd also suggest this is playing out in the capitalist resistance to Rifkin's evolution to the collaborative commons. We see the former accusing the latter of Borg-like communism or socialism, often due to the former's dysfunctional individual 'freedom' to control everyone else's freedom. Who is the Borg here? Resistance is indeed futile, for the healthy hybrid Borg is coming. The Hyborg?

Transhumanism is a relevant discussion, of which there are several varieties. See this prior forum discussion. Speaking of the usual kennlingus wet-dream variety of transhumanism, the new movie Transcendence should provide ample ejaculations of this type.
Posted by Edward Berge at 1:18 PM