In the last post on creativity and madness I had a photo of Lady Gaga. I first became aware of her at local west coast swing dances. They play a number of her songs and women of all ages seem to go wild and sing along with her songs. They are great dance tunes but I'm starting to become aware of her as an international performance art phenomenon. She is so avant-garde and off-the-wall in her TV performances that I've become fascinated like millions of others around the globe. For example check out this video of her hit Bad Romance. It also doesn't hurt that she's gorgeous to look at it her skimpy outfits. And the artistic imagery and costumes!
According to Wikipedia, “The main idea behind the video is that of Gaga being kidnapped by a group of supermodels who drug her and sell her off to the Russian Mafia.” Lady Gaga said about the song: “What I'm really trying to say is I want the deepest, darkest, sickest parts of you that you are afraid to share with anyone because I love you that much.”
Recall her lyrics:
“I want your ugly, I want your disease, I want your love.”
Note the one scene where she's in stop-motion and glistening, crystal beads are all around her. This evoked Indra's net for me. I don't know if that was her intention but it did so nonetheless. Especially in the stop-motion, like a freeze-frame, indicating how each moment or individual is apparently on its own but really connected to each other moment or individual with continued motion or reflection in every other.


And then there's the chant that start's Bad Romance:

Rah-rah-ah-ah-ah!
Roma-Roma-ma-ah!
Ga-ga-ooh-la-la!
She is invoking Rama into herself! Holy shit! Rama, the avatar of Vishnu no less. Hmmm.
Now I realize I might be reading into what I see, adding my own meaning. Well of course, as do we all! That's a main point of postmetaphysics, that we create the meaning and that the object or art or whatever has no given meaning, of itself, in itself, by itself. Indra personally told me so. 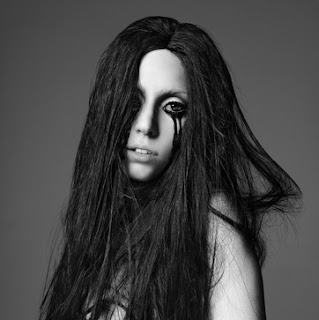 She says the following in her 3/4/10 interview with the New York Times:
“I work very hard, but when God opens that door for you — when life opens that door for you, I should say — I think it’s important to be giving, to return the love back. I have a spiritual guide, not a therapist but someone who in my mind is connected with a higher being, and he helps me a lot.”

“What does he bring to the party?”

“What I like about him is that he doesn’t speak to me like I am a normal person. He understands that I have an eccentric way of life and personality. And he also understands that I am famous, and I appreciate that. He tells me that I no longer serve my life in the normal way that people serve their life, that I must serve the greater good in my service to the universe. And for me, it’s my fans. I only serve my fans.”
In occult terminology she has a holy guardian angel. Metaphysicians see this as an actual being on a higher plane that we contact and allow to manifest through us. In a more psychological view the HGA is the projection of our highest aspirations and serves as an exemplar for better behavior. What it “really” is or is not is moot if it gets us to be better people. Whether it is metaphysical does indeed have practical consequences, but that's a story for another day.

And btw, Gaga is obsessed with work partly because of her phobia-ridden “real” personality. She uses it as an escape from facing her many personal problems, so her service to fans is not entirely “spiritual.” On the other hand, her personal problems make their way into her art as unique, idosyncratic twists. We, as fans, not only accept but appreciate her “ugly” and her “disease” as part of the package.

For me “spirituality” encompasses many things, including acceptance, love, liberation and of course madness. I think she is about all of that and more, and certainly in a postmodern context-media.
Also recall one of the most moving scenes from the movie Avatar, when the tribe is gathering around the Mother Tree, singing-chanting, swaying-dancing, evoking imagery, invoking Goddess. I get this same feeling watching Gaga, the same deep connection to my primal roots, freeing me to sing and dance along, breaking the bonds of convention and being true to all my relations.
I had a negative reaction to the Telephone video at first. But with repeated viewings I changed my mind.

Here she's wearing glasses made of burning cigarettes. As you might know, in prison smokes are literally capital and highly valuable. If effect this photo is a statement on how we are chained to, and see everything through, barter-colored lenses. We are prisoners to our market-created desires and our capacity to afford them. I'm going back to the Telephone vid with new "glasses" and things like the above are dawning on me. Such message are powerful liberators, methinks.


I'm also thinking that the diner scene is metaphoric. Beyonce's lover treats her like an object, like shit so she poisons him. This could be a social commentary on abusive relationships, how they are poisonous. Same with when Gaga poisons the rest of the diner patrons. Perhaps it's a statement on how Americans eat? How such fare as is found in diners is usually full of fat, salt and sugar and leads to obesity and diabetes? In other words, how we poison ourselves through diet?
Let’s address her bisexuality and the rumor that she is a hermaphrodite. She admits to bisexuality and in an interview with Barbara Walters denies the latter. Of course this issue was addressed in the first minute of Telephone, where her clothing is stripped off and she gives a crotch shot to the camera in a see-through leotard. It is obvious she had no dick and one guard remarks to the other: “See, I told you she didn’t have a dick.”


The point is not so much that she is a medical hermaphrodite but that she has become a mythical or metaphorical hermaphrodite. The term comes from the offspring of Hermes and Aphrodite, Hermaphroditis. The latter is turned into a bi- or intersexual when Salmacis merges with him in her pool of water. Mythologically a hermaphrodite represents the union of male and female within any individual, mystically referred to as “the marriage of heaven and earth.” This also refers to the mystical marriage between an individual with God or deity. Some might contend that the former requires the latter, that we must balance the sexes within ourselves in preparation for the greater marriage of this balanced self with the divine. In modern mythology this story is played out in Peter Pan.


On a mundane level Gaga’s admitted bisexuality is an exemplar for breaking the convention of only engaging with the opposite sex. It also breaks the convention of monogamy. Granted both have significant survival and social functions in perpetuating and maintaining the species. But developmentally beyond this, when these functions have been satisfied for the species as a whole, is opening to a wider range of liberating love to more than one partner and more than one’s own sex. As we all know sexual love is quite powerful, especially when sublimated in tantric techniques beyond only physical ejaculation, to elicit higher centers of consciousness development. And within this methodology there is no restriction on polyamory or bisexuality. Liberation and unconditional love know no boundary.


So the rumor that Lady Gaga is a hermaphrodite is but an expression of the larger, cultural mythology that she is a child of the mystical marriage, a communicant and exemplar of marriage within herself and with the divine, and her message (Hermes) is love (Aphrodite).
See Lady Gaga's 2011 Grammy performance at this link of her new song "Born this way." It's in a menu below the featured video. For a better sound recording of the song visit Gaga's site.
Posted by Edward Berge at 10:30 AM