Another key difference between Sanders and Clinton

See this article. During the debate Clinton emphasized what would change if she won. Sanders kept saying if we win. This is a huuuuuge (a la Trump) difference. Clinton is still caught in the old school capitalist individualism where great leaders must be in charge. Sanders is from the emerging Commons paradigm where autonomous individuals coordinate and organize to govern together. This is going to take a mass movement of we the people to vote for representatives that enact democracy, and for us to hold them accountable to the people's platform. Governmental 'leaders' are public servants, not the lapdogs of the oligarchs. Sanders understands this and is a people's candidate. Clinton does not and is going to keep the oligarchs in power. Which, btw, is the transition from capitalism to the commons, from individual liberty to autonomous individuals working for the common good, from post/modernity to an integral age. 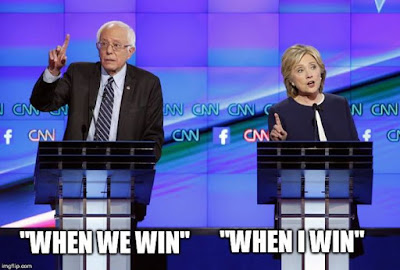