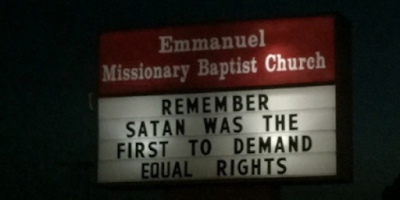 Which is not to say all Christianity is toxic, just that branch that buys in to dogmatic authoritarianism. An excerpt:


"This church sign captures everything that is wrong with toxic Christianity and why it positions itself against the struggles of marginalized people, whether they’re brown, queer, female, or poor. The root presumption of toxic Christianity is that order and authority are right by default. Sin is defined as rebellion against authority. Adam and Eve’s rebellion in the Garden of Eden is understood to be the paradigm for what sin looks like. It may seem straightforward to start with Eden in defining sin, but doing so has real consequences in how we understand the relationship between sin and worldly power. Jesus didn’t harangue people for eating forbidden fruits; he primarily went after the sinful exploitation and oppression of the religious authorities in his day. That’s what got him killed. Jesus’ cross was the angry reaction of religious authority against a God’s rebellious love. That’s what sin looks like in its purest form: power’s hatred of love."
Posted by Edward Berge at 1:22 PM