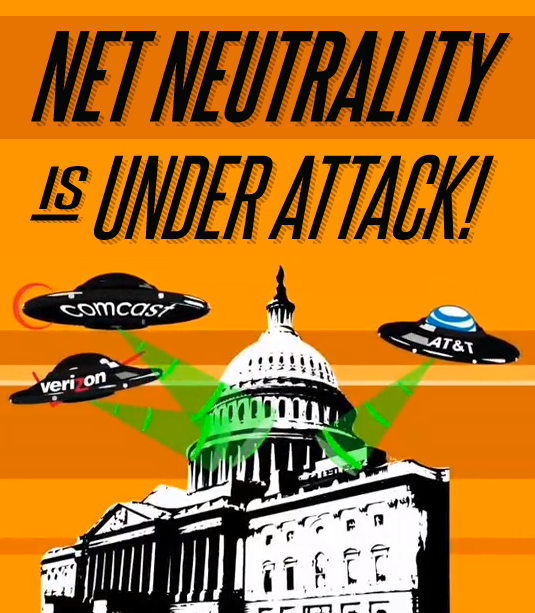 See the freepress petition below my comments. The regressives in Congress now want to make it illegal to classify ISPs as common carriers. They want to make democracy illegal! No surprise really, as that is the corporate agenda, to turn us into a fascist oligarchy. Here are my comments that I added to the petition:


Could it be any more apparent that this Bill reflects the Republican leash to the corporate oligopoly? The rest of us want democracy, and that means keeping the internet neutral. And that means it must be classified as a common carrier. Don't worry, the ISPs will still continue to make a lot of money that way so they can fill up your coffers. But let's preserve democracy, since the rest of us can vote you out of office if you keep sucking the corporate teat. Then NO money for you. Until of course you go to work for the ISPs, your ultimate goal apparently.

And now freepress on the petition:


Take Action to Stop the Attack on Net Neutrality.

Support for Net Neutrality is building — in the streets, in Congress, in Silicon Valley and at kitchen tables around the country. But the more traction it gets, the more vicious the attacks on the open Internet have become. Enter Rep. Bob Latta who has just introduced a bill (H.R. 4752)1 that would stop the FCC from taking the necessary step to protect real Net Neutrality. It's a move that borders on insulting and actually forbids the FCC from doing what millions of people, companies, innovators, artists and organizations have been urging it to do: reclassify broadband providers as common carriers.

Tell Congress to say NO to this toxic bill.


Reclassification is the only way to stop companies like AT&T, Comcast and Verizon from creating fast and slow lanes online. If the FCC fails to take this simple step — or if it's restricted from doing so — the Internet as we know it could be lost. That's exactly what AT&T, Comcast and Verizon want. These companies are paying good money to make sure Congress does their bidding.

Tell Congress: A vote for this bill is a vote against the open Internet.

In Washington, the only thing more powerful than lobbyists' cash is the united voice of the people. Let's stop this thing in its tracks. Josh, Candace, Misty and the rest of the Free Press Action Fund team freepress.net

P.S.: Does this image look familiar? It should ... it's the same one we used the last time Congress tried to destroy Net Neutrality years ago. We won then and we can win again, but we need your help.

P.P.S. This spring and summer we're ramping up on the organizing front to save Net Neutrality. Please chip in $10 (or more!) to help support our work. Thank you!