God and the Between

I started this book by William Desmond. Balder has a Ning IPS thread on Desmond. He started the thread with this, quoting the Wm. Desmond Reader:

"The theoretical core and signature idea of Desmond's thought is the 'between,' which leads him to describe his work as a 'metaxology' (from the Greek metaxu). The metaxological can be thought of as a different way to relate to the same and different, in contrast to the Hegelian way of 'dialectical' mediation, which unites them in a higher unity. For the upshot of Hegelian mediation, he argues, is to close the circle between the same and the different and thereby to subordinate everything to the rule of a higher integration and sameness. The 'between' means to keep this circle open and in that way to preserve difference. Never attaining the ground of a higher totalizing and integrating unity, the 'between' occupies the open space that preserves the distance of the same from the different. The same does not return to itself through the different; rather the space of the play between the same and the different is sustained, allowing for relations of otherness, difference, and plurality to obtain along several orders -- between mind and being, immanence and transcendence, finite and infinite, and singular and universal."

Just reading the Preface, I like the metaphor of porosity, which refers to the spaces within rocks. It's akin to what Edwards calls the 'space between,' though he usually uses it to refer to those spaces between two or more holons. But I also like the reference to the spaces within an individual holon like a rock or a human.


It also reminds me of my research into how there are overlapping spaces between categories using basic category and image schema references. This can even be applied to the 4-quad diagram, which seems by its nature to cleanly separate and pretty much seal quadrants and zones, whereas Bryant's Borromean diagram shows this overlapping space between domains. 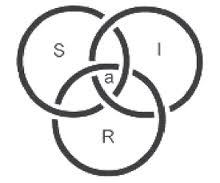 Speaking of Edwards, this also reminds me of his 2015 collaborative effort on syntegral inter-bridging, also using basic category and image schema references.

Desmond jokingly suggested that his whole text be crossed out, like Heidegger crossing out being. One can still see the word 'being' but the strike-through indicates something else. Which of course reminds me of this Caputo quote on the same topic, discussing Zizek. (Interesting in light of so many zombie-referenced films, tv shows and books, perhaps indicative of something similar?)

“Žižek provocatively suggests an odd kind of 'positive' unbelief in an undead God, like the 'undead' in the novels of Stephen King, a 'spectral' belief that is never simple disbelief along with a God who is never simply dead (101). God is dead but we continue to (un)believe in the ghost of god, in a living dead god. If atheism ("I don't believe in God") is the negation of belief ("I believe in God"), what is the negation of that negation? It is not a higher living spirit of faith that reconciles belief and unbelief but a negation deeper than a simple naturalistic and reactionary atheism (like Hitchins and Dawkins). Belief is not aufgehoben but rather not quite killed off, even though it is dead. It is muted, erased but surviving under erasure, like seeing Marley's ghost even though Scrooge knows he is dead these twenty years; like a crossed out letter we can still read, oddly living on in a kind of spectral condition. Things are neither black nor white but shifting, spectral, incomplete. We have bid farewell to God, adieu to the good old God (à Dieu), farewell to the Big Other, Who Makes Everything Turn Out Right, Who Writes Straight with Crooked Lines, who maketh me to lie down in green pastures. Still, that negation of negation does not spell the simple death of belief but its positive mode in which belief, while dead, lives on (sur/vivre). This unbelief would be the 'pure form' of belief, and if belief is the substance of the things that appear not, Žižek proposes a belief deprived of substance as well as of appearance. Žižek mocks Derrida mercilessly, but when spaceship Žižek finally lands, when this buzzing flutterbug named Žižek finally alights, one has to ask, exactly how far has he landed from Derrida's 'spectral messianic.'”